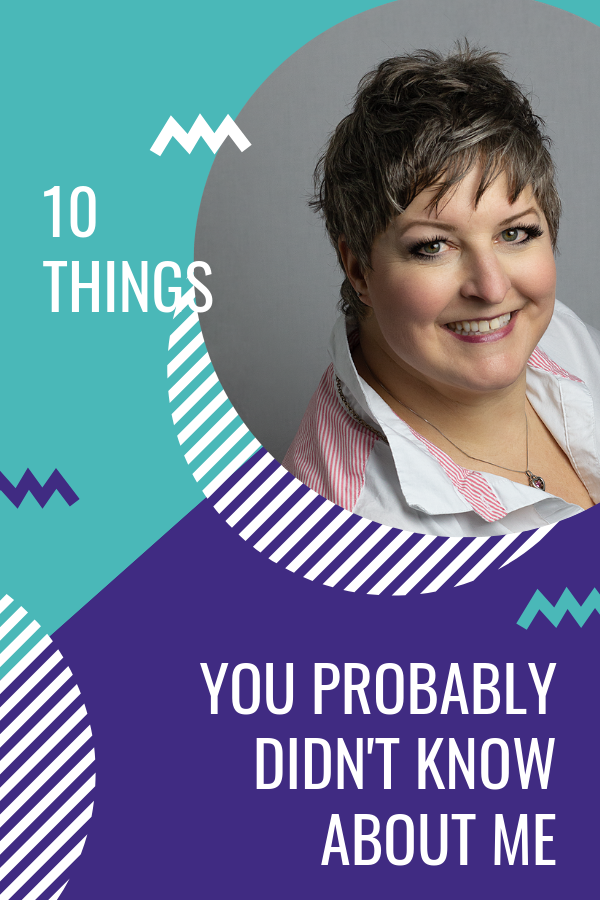 It has been so much fun watching the number of readers to my blog grow.  I suddenly realized that many of you may not really know a whole lot about me.  Now is just as good a time as any to let you in on some of my secrets.  So here are 10 things you probably didn’t know about me.

I lived in Tokyo, Japan as an Exchange Student when I was 15 years old (a Sophomore in High School).  I attended Meiji Gakuin Higashimuriyama, a private, all-boy High School (Check out their website HERE). It is now co-ed, but at the time, I was only 1 of two female students in the building.  The other female was also an exchange student.  I learned to speak Japanese, but it has been many years and I have not used it enough to retain it well in my adulthood.

I am currently learning Spanish, and that has been bringing a lot of Japanese back to me.  It seems once you’ve learned a language, it’s a bit like riding a bike and your brain remembers it deep down.  I’m not an expert at language learning, but I do love it.  Here’s a great article from someone who is an expert that gives you 12 Reasons Everyone Should Learn Another Language.  Check it out HERE!  I have used DuoLingo online and as an app on my phone as a FREE study aid while learning Spanish. It’s totally worth checking it out!

When I was a child, I was ridiculously picky about what I would eat.  Some textures simply did not agree with me, and I really didn’t like foods that required a lot of chewing.  I was a skinny little kid that refused to eat meat.  I distinctly remember choosing fish sticks over meat anytime I had the option.

When I had no choice but to eat meat, I would sometimes chew it for hours on end without swallowing.  I just didn’t like the whole meat ordeal.  I was always reluctant to eat at mealtime and was always the last one finished.  My parents used to set the timer on the stove and clean up around me while I sat there knowing I had to stuff down what was on my plate before that timer went off.  Sounds terrible, doesn’t it!?  At one point my hair began falling out of my head.  A quick trip to the doctor informed us that I was anemic.  I remember my parents allowing me to eat the meat out of my sandwiches as a compromise (I didn’t like bread, either).

Got a picky eater of your own? Science and Child Development experts now recognize this as an actual “thing”. Here’s a great book to help you learn how to deal with it!

I love every book National Geographic has produced.  This one is especially cool for planning that epic trip (or two). I would love to see every one of these places in my lifetime!

Dr. Evil has nothing on me!  I have my own version of Mr. Bigglesworth.  Except my bald kitty, Scarlett No’Hara, is much cuter, if I do say so myself.  She is going to be one year old this summer (2019) and has the most fascinating personality to go with her unusual look.  She came all the way from Pennsylvania, where my grown daughter and I road-tripped from Michigan to pick her up early last fall.  What you may not know is that a bald cat feels like a hot, feverish peach.  Some say the feeling reminds them of a horse’s muzzle.  Who doesn’t love that!?  She is an outstanding jumper, behaves like a dog, and perches on my shoulder whenever she can.  We say she is part spider monkey and part parrot.

Considering adding one of these beauties to your home?  Click HERE for some info to check out before you jump in. But trust me when I tell you that my experience has been top of the line. And if you’re REALLY interested, get in touch with me and I can share my breeder info with you! She’s excellent!

5 – I Acted My Way Through High School

Yup.  You heard that right.  I acted my way through High School, although maybe not in the way you might first think. Since I started out as a bashful kid, as I grew, I figured out it was fun to put on a different character and be someone else through our small school’s theater program.  It was so much fun being in one of the leading roles on stage from grades 8 through 12 and I loved every minute!  In the five years I enjoyed theater, I played parts such as Helen Keller in The Miracle Worker and Florence Unger (female version of Felix) in The Odd Couple.  My favorite parts of being in theater were having the camaraderie with my fellow cast and the thrill of stepping on stage.

Yep – that’s me in my senior year of high school, as Florence Unger. I was a natural at this uptight character!

To this day, I love the theater and am happy to see just about anything on stage!  Some favorite shows I’ve seen in the last few years are Wicked, Les Misérables, and the Lion King.  If you haven’t been to a Broadway show, you should definitely treat yourself!

If you sign up for emails from Ticketmaster (click HERE), you will have access to presale ticket information for shows in your area.  I recently scored first rate tickets to the traveling production of the Book of Mormon on an early presale event for under $70 each.

Wondering what a Creep Factor is?  It’s a term I personally coined to indicate when I’m feeling entirely creeped out by something.  Most fantasy-type movies do it for me, starting with the Wizard of Oz.  High creep factor there. Or maybe low, since the movie is highly creepy for me, and I have a low tolerance for it. By low tolerance, I mean I don’t like it.  It scares me.  I know it’s harmless, but watching it gives me the heebie-jeebies and I prefer to avoid it at all costs.  Imagine my sadness when I found out that our town’s local park (where my husband and I were married) is going to be re-decorated in the theme of the Wizard of Oz.  Sigh.  Perhaps it will be lower on my creep factor scale since there won’t be any actual flying monkeys.  At least there better not be!

Here’s a LINK to the article that tells a bit more about our local park and the plans.  This article also includes an interesting side note about Frank L. Baum, The author of The Wizard of Oz.

7 – I Dream of Imagineering

If I could wave a magic wand and have any career I could imagine, I would be a Disney Imagineer – specifically an animator or somehow consult in building the parks.  I love all things Disney and have been to Disney World in Orlando four times and Tokyo Disneyland multiple times.  Not only do I love the parks and the movies, but I just think those Imagineers have the coolest job ever, making movies and entertainment that brings so much joy to so many people. Let me in, Disney!!!! I’m creative, I promise!

Take a peek into the life of a Disney Imagineer HERE.

I have 5 kiddos.  Two are grown and married, two are grown and living life, and one is still at home for a few more years.  He came along ten years after the other four.  My oldest grown son and his lovely wife have a darling little boy and have recently promoted me to Grandma of two by adding a beautiful baby girl.  I think the craziest, bumpiest, scariest, most rewarding thing I’ve ever done in my life has been parenting those 5 kids.  And now, every single minute of being a grandma agrees with me. Is there anything better than the privilege of enjoying this sweet little boy and his darling sister?  They represent all the love of having more kids, with almost none of the work (besides a few nasty diapers here and there, but after five kids, I’m pretty much a pro at that).

I am no athlete.  Far from it.  That’s probably why I take such pride in this one fun accomplishment.  Shortly before I turned 40, I decided it would be a good idea to run a 5k.  You know, just so I could say I did it. So I did it. I trained using the Couch to 5K program, bought some fancy running shoes and a really cute pink and black jogging outfit, and went for it!

After all the fun of that little run, I found myself motivated to push past the 5k and right on into a half marathon…  That’s right…  You heard me correctly.  Half Marathon.  13.1 glorious miles!  So, I set out to accomplish that goal.  And I just about made it.  Sadly, Mother Nature had other plans.

The stage was set, the training done, the water bottle full, and I was ready to go.  Unfortunately, after about 5 miles, a storm blew in.  The lightening began, the thunder cracked, and the event was cancelled.  Before I could even perform my after-run stretch (midway through the route), the cop car pulled up to pick me up and delivered me safely across the finish line.  Sigh.  I know I could and would’ve finished that race, so I hung up my running shoes and called it a success.  I haven’t run since and it’s been close to ten years.

So, this one is a bit tough for me to share, but in the interest of honesty, I think it’s really the only way to roll right now.  I am on a journey with my photography and blogging that is scary.  I am anxious and fearful that I am not cut out for this adventure.  But more than anxiety or fear, I have confidence that God has steered me along a path in my life that puts me exactly where I need to be right now.  He has given me the tools and the ability to do just about anything I set my mind to, as long as I seek His will and His guidance, no matter how scary it all is.

After all, I have made it through more than one viewing of the Wizard of Oz, I have run (almost) a half marathon, and I have raised a whole bunch of really cool people into adults.  I am absolutely certain that I would not be where I am today if not for my Father’s loving touch on my life. Thank you for sharing in this journey with me.

I would love to know how I can improve this blog for my readers.  Would you be willing to fill out THIS ANONYMOUS SURVEY?  I sure do appreciate your help!