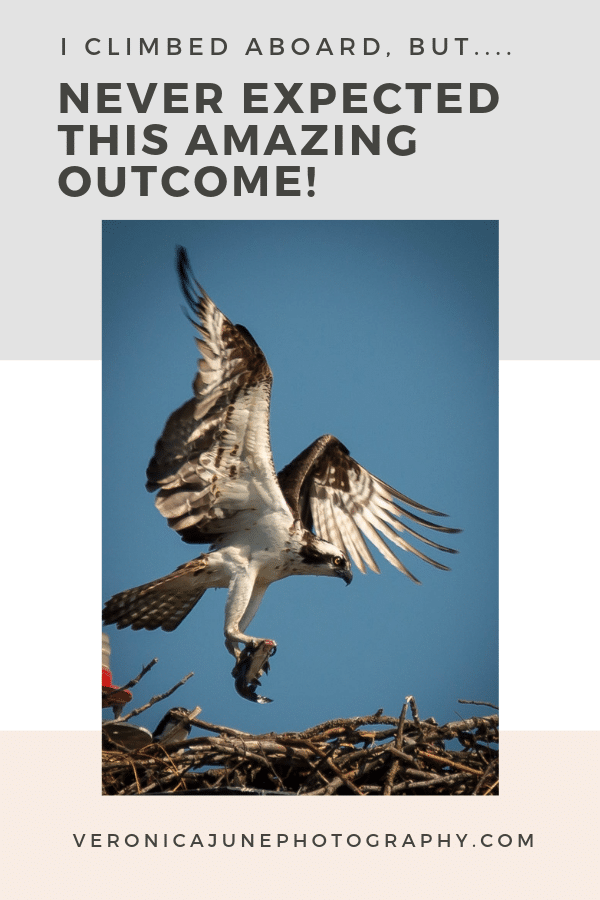 We may have been compensated through an experience or products from the links and companies mentioned in this post. Thank you for supporting my small business. Please see my disclaimer for more info.

All About a Boat, an Osprey, and a Photograph

When I packed my camera that morning, I had no idea I’d get an opportunity to not only watch an Osprey hunt, but I’d also come home with some fantastic photographs of a local Osprey! I didn’t even know we had such a thing in my little corner of the world.

Suddenly a little head popped up… then another… Osprey heads?

I had no idea what kind of bird it was, but it was huge…  and gorgeous…  and was swooping over Lake Macatawa while my husband and I were on an afternoon cruise around the lake.  I’d like to take credit, but it was Dan who spotted the big, beautiful bird soaring above the water.

As we watched, the giant bird swooped straight down into Lake Macatawa and came back up with a great big Catfish!  Clutching the Catfish in its talons, the bird headed straight back to the nest while we followed.

It was a nest, and a big one at that!

The giant bird and his family were nesting atop a lake marker, one of the giant structures made of steel and cement and permanently anchored in the land beneath the lake.  I’m not exactly sure what purpose the markers serve, but they are very large and prominent in the lake.  When we first looked, we saw a messy pile of sticks and rubbish atop the marker. We could see movement from within the pile of sticks as we made our way around it.  Suddenly a little head popped up, then another, and yet one more!  It was a nest and a really big one at that.  And bonus! There were baby birds in there!

We watched dad fly in holding the Catfish and perch at the edge of the nest.  Three tiny heads popped up and down.  At this point, the dad was more interested in watching us than feeding his babies.  He kept a close eye on us and occasionally shrieked in our direction to indicate that he did not appreciate the audience.

Captain Dan patiently drove me around and around that buoy while I snapped photo after photo.  What was this beautiful bird?  We knew it was very, very large, about the size of a Bald Eagle.  On a side note, it is on my bucket list to get some gorgeous shots of Bald Eagles in their natural habitat.  That will end in another post on another day.  For now, I had a better view through my long lens than with my naked eye.  If you’re wondering what a “long lens” is, then check out TEN NEED TO KNOW PHOTOGRAPHY TERMS FOR THE BEGINNER. Unfortunately, I am far from an expert at identifying bird breeds.  Since this big guy isn’t likely to show up at my backyard feeder, I was completely at a loss as to what we were seeing.

After several trips around the marker getting shots from many angles, we decided it was time to give the birds some peace.  Moving along, we headed for the bigger waters of Lake Michigan.  We took a peek at the nest on our way back through Lake Mac after a picnic and a walk down the pier.  The parents’ heads were peeking out of the nest, but the babies were tucked in for the night.

Once we got home, got the boat stowed away, and had showered the sun and lake and sand off us, I took a look at the photos I had captured.  I then pulled out the Backyard Birds book to see if I could figure out what we had been watching.

“We would not likely find an Osprey in our backyard, but it’s nice to come visit one nearby.”

I was surprised to find the bird in the “Backyard Bird” book since we would not likely find one of these big guys in our own backyard!  We had been enjoying the nesting and feeding habits of an Osprey.  Turns out that the numbers of Osprey have declined over time in Michigan due to the use of DDT on our crops in the ’60s and ’70s.  Efforts have been made to reintroduce Osprey into Michigan.  These efforts have paid off and the Osprey are returning.  What a pleasure it is to have a nesting pair where we can visit regularly throughout the summer.

If you are interested in learning more about the Osprey and the efforts to reintroduce them into Michigan wildlife, check out the Michigan Osprey site by clicking HERE.

It pays to be prepared and ready for anything!

It’s great to be prepared, even when you’re not really prepared.  Fortunately, I had the right equipment packed and could think quickly on my feet.  Here are some tips for capturing great wildlife photographs in case you find yourself in a similar spot!

Related:  How to Capture Action in your Photos with Shutter Speed