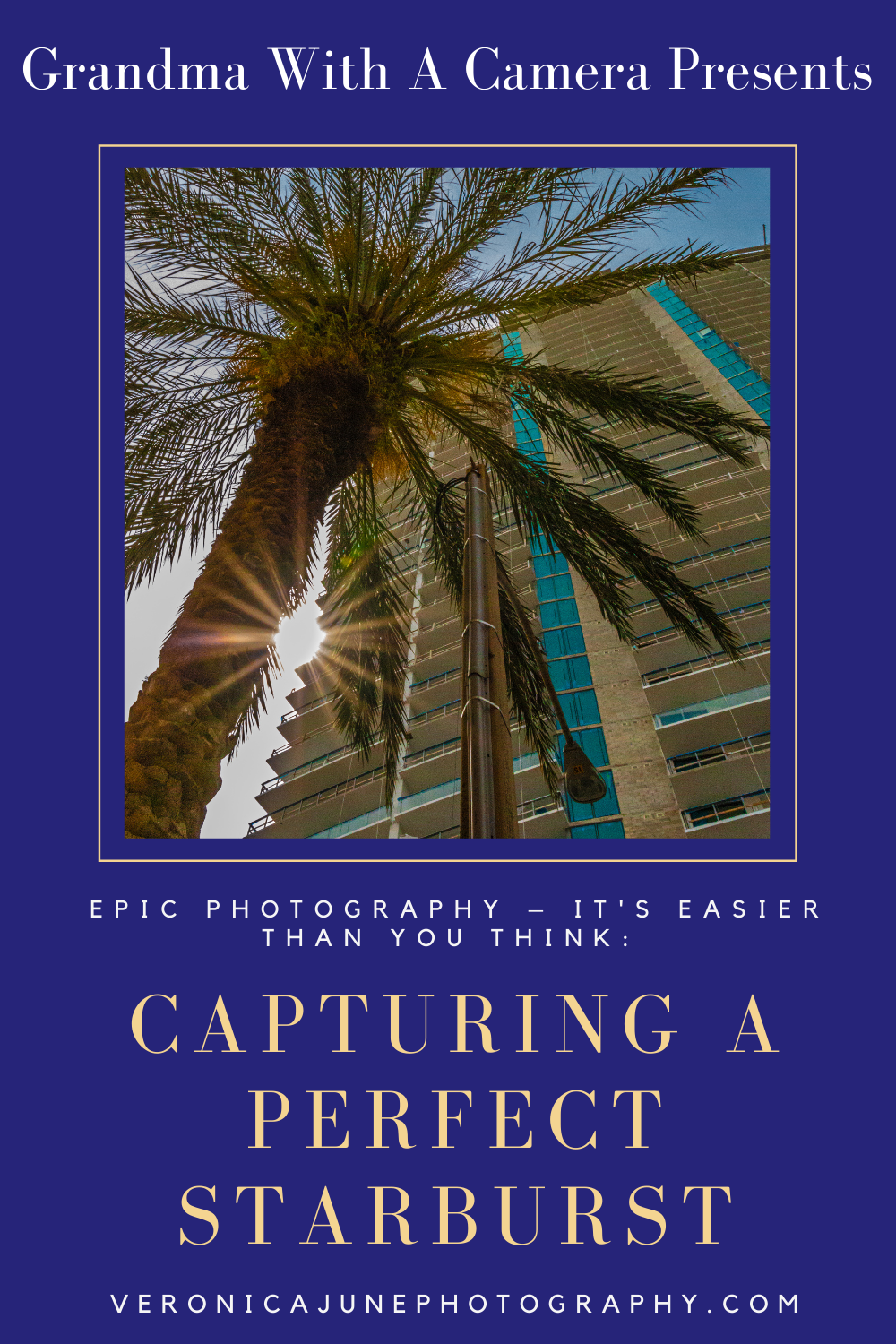 Epic Photography – Capturing A Perfect Starburst Is Easier than You Think

You’ve seen those photos with eye-popping starbursts.  What a cool way to bring a little wow factor to your photos!  Think that’s too tricky for you to bother with?  Wrong.  Capturing a photograph with a sparkling starburst is easier than you think.  With just a few adjustments to your aperture and settings, you won’t be able to resist adding this effect whenever and wherever you can!

THE MAKING OF A STARBURST EFFECT

There are a couple of ways you can create a starburst in your photography.  The first way is simple and a bit old-fashioned.  You can purchase a lens filter that gives a star effect.  However, there are definite drawbacks to going that route.  First, anytime you add a filter to your lens, you risk lowering your photograph’s quality and sharpness.  Second, there is an investment involved because you will need to purchase a star filter for each different size lens you have.  The fewer dollars we need to spend, the more money we have to spend on traveling to somewhere fun, right?

Finally, it is one more piece of equipment that you need to put on and take off your camera every time you want to see a starburst.  That may be convenient at Christmas when you want to take a photo of your Christmas Tree lights (with or without your kid posed).  I mean, your tree is stationary and conveniently located.  That effect filter becomes far less convenient when you’re touring and want to snap a quick shot on the run.

Check out this set of star filters…  Nice to throw in your bag and use when you have time to screw a filter on and off your lens.

THERE IS ANOTHER WAY…

AND SOME SCIENTIFIC STUFF, TOO.

The second way to capture a starburst effect (and more impressive) is to adjust your settings as you’re shooting.  A starburst happens due to something called diffraction.  Diffraction takes place when light hits an object and then bends with the object’s shape.  The smaller your aperture (bigger #), the smaller space your camera has open for light to enter.  When the light hits this smaller opening, it bends around the aperture blades and creates the starburst.  It’s all very scientific, and that’s fantastic if you’re into that kind of stuff.  CLICK HERE for a great article that explains diffraction in delightfully scientific detail.  If you’re just not into the scientific stuff, then hang in there.  We’re getting to the good stuff soon!

The basic idea that you need to remember here is that diffraction always occurs in photography.  It is, however, relative to the amount of light coming into your camera through the lens.  Diffraction is why your photos are sharper when your aperture is bigger (smaller #) because there’s more open space for the light to come in. More light coming in equals less bending, thus sharper details.  You might not notice this with the naked eye, but as soon as you go zooming in tight in post-processing, you will see the truth of this statement.

And now, we return you to your regularly scheduled blog post…

Where were we?  I believe we were talking about light coming into your lens.  Yes.  When the ambient light is very bright in your scene, you need a mega bright light for a starburst to happen.  That is why you can get a huge starburst from the sun during the day, but it’s tricky to get a starburst from much else.  During daylight, the sun is the only thing bright enough to give you the bursts.  Conversely, when the ambient light is low, then you don’t need nearly as much light at all to create a starburst. In fact, just about any concentrated light source is bright enough to produce the effect you’re looking for.  Just think of the lampposts, streetlights, Christmas lights, and candles you can work with here!

So watch and see how easy this is….  The smaller your aperture (larger #), the larger your starburst!  That’s how simple it is.  Say it with me…   Large number = large starburst.  Of course, you must adjust your ISO and Shutter Speed to get the correct exposure.  THE ULTIMATE GUIDE TO SHOOTING IN MANUAL is a great place to start if you’re still learning how to get that DSLR off the auto setting.  It will be worth it, I promise!

Don’t forget that every lens has a different range of aperture.  Some lenses are fast and go as high as 1.8 or even higher.  Some go as low as 22 or below.  Each lens will have a different range, but the basic theory remains the same….  Think Large Number = Large Starburst.  You can learn all about aperture and how it works in Photography Facts: The 5 Things You Need-to-Know about Aperture.

If you’re shooting during daylight, don’t forget your lens hood.  It will help shield your lens from too much ambient light coming in.  It’s as simple as that.  If you don’t have one handy, hop into your local camera shop and grab one for a few bucks.  Just be sure to get the right size for the lens you’re using.  If you don’t have a local camera shop, you can pick one up just like THIS ONE on Amazon.

Try this out for fun!

Another fun technique that will help you get a starburst effect during the daytime is to compose your shot with an object in the foreground, such as a building, or a tree, or even a person, to obstruct the sun partially.  Remember – the sun is massive and can be overwhelming in power, both at midday and even at sunrise or sunset.  Because it is so very bright, you have lots of room to play with.  When you partially obstruct that level of brightness, you amplify the diffraction effect.  Try this if you’re finding that your sun is more of a giant blob of white rather than a beautiful burst.  Take care not to block it completely – just let a little bit peek out from behind your object, and you’ll be amazed!!!

If you’re going out at night, you’ll want to bring your tripod and a remote trigger.  To get the light balanced for the correct exposure, you will need to slow down your shutter speed to compensate for the low aperture (high #), so it is important to keep your camera as still as possible.  Of course, you will also want to use your camera’s 2 or 10-second timer delay or a remote trigger to really stabilize the shot.  Here are a couple of recommendations to get you started:

This is the remote trigger I use that has a cord.  Simple to use and plugs in quickly.

This is the tripod that I use.  It’s high-quality, waterproof and lightweight!  Check it out!

Bringing it all together…

One final tip – don’t forget to look for opportunities for starbursts in places where you wouldn’t normally expect them.  Like treasures, they are hiding, waiting for you to find and capture them.  Keep an eye out behind people or flowers, in the reflections of buildings, or on the water…  No matter what time of day or night you are shooting, know that a starburst can add a whole lot of character and excitement to your image.

Now that you are ready to get out and start practicing, I’ve created a little cheat sheet for you.  You can use this as a jumping-off point for some basic settings when you’re out in the field and need a quick reminder of how it all works…  Remember – the very best way to learn a new technique is to practice, practice, practice, so get that camera out and get shooting!  Don’t be discouraged if you don’t get a perfect result on the first try.  Be sure to keep trying until you get what you want.  And then do it again and again till you can get it on the first try!

I would love to know how I can improve this blog for my readers.  Please take a moment to fill out THIS ANONYMOUS SURVEY.  Thank you for your help! 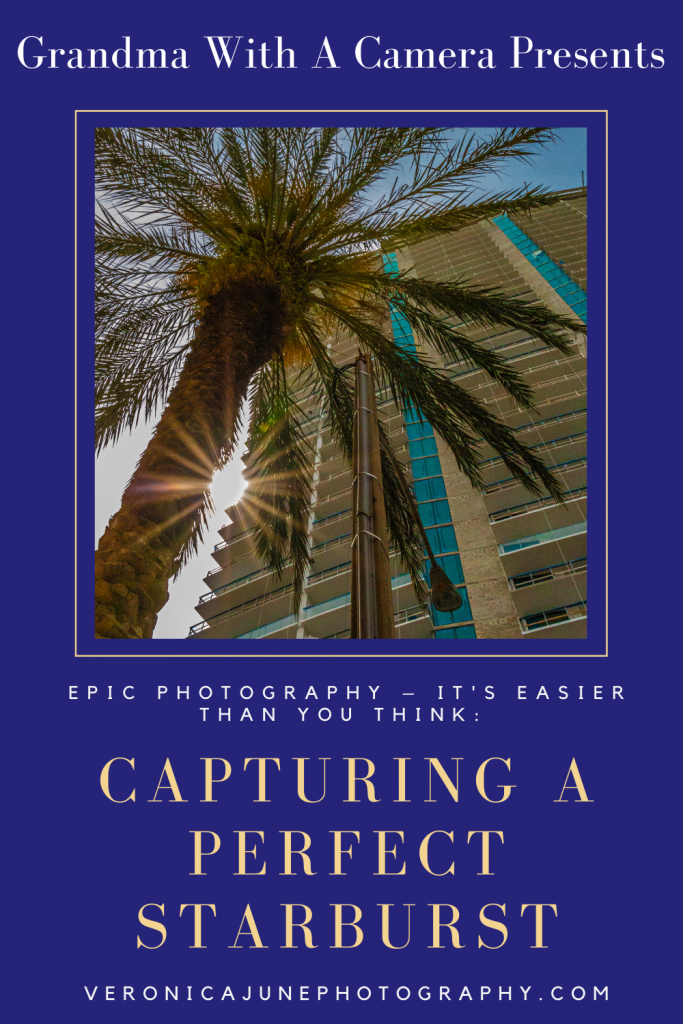